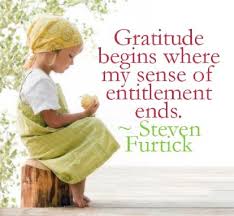 You ever wondered how people has this sense of entitlement? No humility or gratitude for anything given I witnessed this first hand at my place of work; I was disheartened from what I saw. Employees not considering other employees, serving themselves multiple portions and not thinking about those that are scheduled to pick up their food at a later time. People making demands, not showing courtesy for their co-workers and some were even disrespectful to those that were helping with the luncheon. For that given moment I felt embarrassed and ashamed that I work in an environment such as this.

It was an appreciation luncheon for all the staff; they were told to come at their given lunch hour. A massive line formed at the first lunch break, it was as though the world was ending.  We knew that the workers standing on the line were not assigned that time frame. It took less than an hour for the food to be almost gone. We had no choice but to ration the trays that were left. It was shocking!

We later found out that the employees thought that the food would be gone, if not picked up early. In the past, we had time frames for lunch pick up and not had a problem. This time around the food delivered was from a well-known restaurant, and apparently, the employees jumped at the chance to get most of the delicious food. No Bueno!

I am resting now and am reflecting on today; again I feel that we have forgotten what is like to be grateful, kind and appreciative for the blessings that are given. I was brought up to be thankful for all things and not to demand anything especially free food. Food for thought!

I am a writer at heart. My love for writing was discovered back in 2009. I truly believe that it is never too late to discover your passion. I am originally from the Bronx of New York and presently reside​ in Kissimmee, Florida since 1994. My interest is vast with a multitude of ideas. I look forward to writing about them and I hope you will join me as I express my views, ideas, and passion for life.